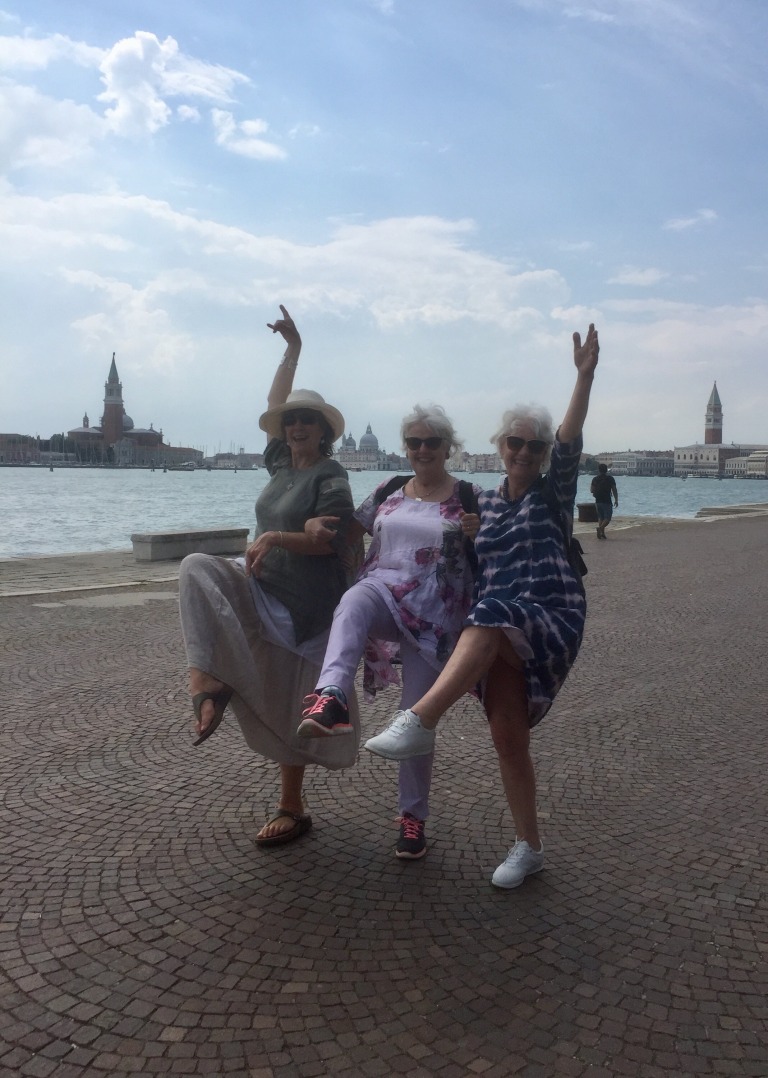 We so loved being in our Garden of Eden, the Venetian island of Certosa. Surrounded by canals and mud banks, it is a green, green jungle with birds singing, a multitude of rabbits and an enormous extended family of cats bearing so great a similarity that we can be sure of their parentage.
Travelling the waterways soon became second nature. It is a wonderful way to see the buildings along the Grand Canal; now seldom used churches, glimpses up canals to small bridges, glorious old palaces beautiful in their decay.  At the gondola stations, the distinctive black lacquer and gold vessels are waiting in their pens, bobbing up and down like horses in their stalls at the beginning of a race – champing for the off. Passing under the Rialto Bridge, Canaletto’s iconic images come to mind, names that conjure up luxury and elegance like The Gritti Palace, films seen long ago such as ‘Don’t Look Now’ and ‘Death in Venice’ all contribute to the sense of familiarity. 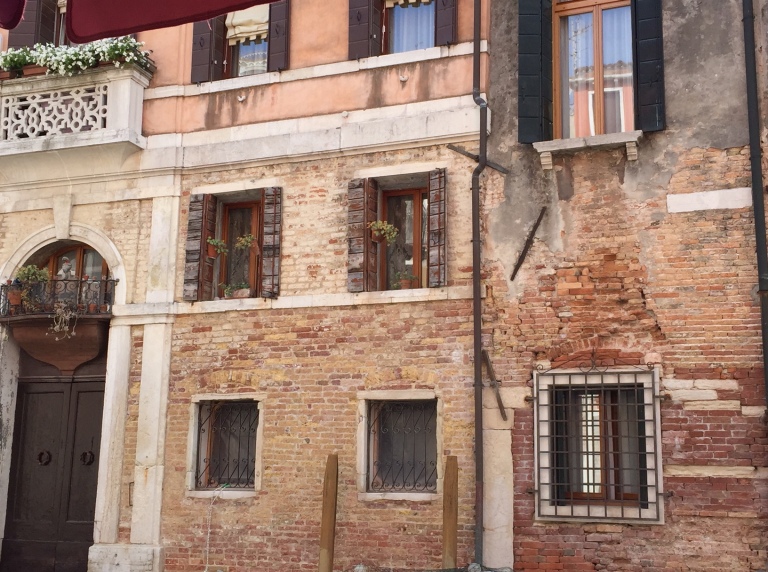 By the end of our time here we felt Venetian. One night, after public transport had stopped, we took advantage of the free shuttle back to our island. We made our way in the dark down the fondamente of S Elena; thoughts of Commissario Brunetti (Donna Leon) and dead bodies in the canal swishing in my head, down to a dead end pier where we called the number we had been given and waited in hope and anticipation. Soon we saw the green and red navigation lights weaving their way into our canal. We were expecting not much more than a dinghy so it was a pleasant surprise to find a substantial boat, our own private launch!
We took our own ‘tour’ of the islands as the vaporetti are very well routed, almost like the London Underground; there is a circular route and a Northern line and this was the one we took by various nifty changes out to the island of Torcello. Torcello was the area first settled by refugees in the 5th Century, fishermen and salt miners, they came to escape raiding northerners and they dragged land from the sea to create the first typical island and canal system that we see today. We were one of the very few who climbed the campanile to be treated to fantastic views over the lagoon. The mosaics in the Basilica were terrifying. They were well preserved and illustrated grimly the usual mediaeval threats of hell and damnation and horrible fates awaiting those who sin and of course all blamed on Eve – A tranquil if not forgotten place.

They say you can’t help but keep fit in Venice and we regularly tramped 10 k a day. Amongst our visits were The Guggenheim, The Museo Storico Navale, The Clock Tower in the Piazza and take note, there is only ONE Piazza in Venice – THE Piazza San Marco. The Basilica San Marco is an extraordinary conglomeration of architectural styles. One minute Romanesque, sometimes gothic, a nod to the east and the Ottomans and I swear I could imagine Chinese dragons dancing up the eaves of the frames that surround the starry tops of the frescoed lunettes; there is sculpture and stone carving, marble and bronze. The interior, along with the Campanile, the highest in Venice and the Correr museum will have to wait. We may be as Napoleon put it ‘in the finest drawing room in Europe’ but sadly we will have to leave these treats for our next visit.

The Museo Storico Navale was housed in huge buildings where they used to make oars.  I loved the colourful sails and the detail on the forward mast – so modern….. 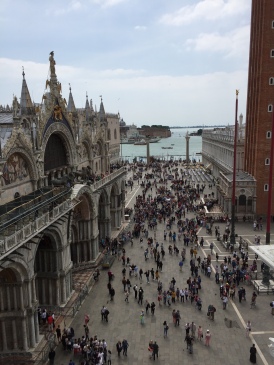 There are shops selling masks and books, paper and leather, high end fashion shops rub up beside old churches; tacky shops and truffle shops do a brisk trade. Our favourite area became the Arsenale with its friendly lions, lack of tourists and cafes and restaurants which we shared with our friends. 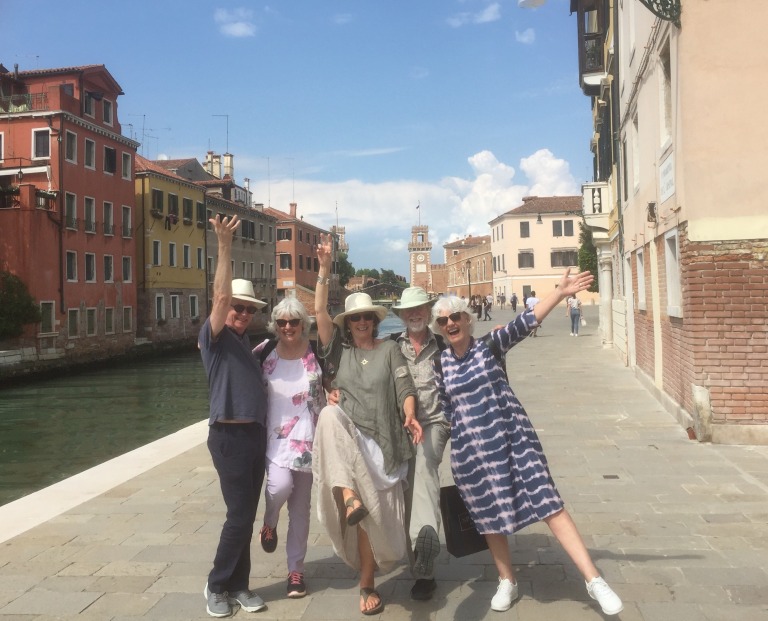 Venice is a city to get lost in and we frequently were but it wasn’t a worrying kind of lost because each step brought us to yet another stunning little vignette. A curving stretch of canal, a bridge in the distance, soft light, the lipid green water, a boat outside a small landing stage gently bobbing, washing strung across and window boxes bursting with flowers. Jasmine blossom pervades the air, pleasant at first but threatening to become just a little sickly sweet and everywhere the colours are tertiary. I’m sure there are, but I cannot imagine these views depicted in oils. It has to be water colours, gentle washes of ochre, greens, terracottas, blues and browns – a city in negative rather than full primary colour. 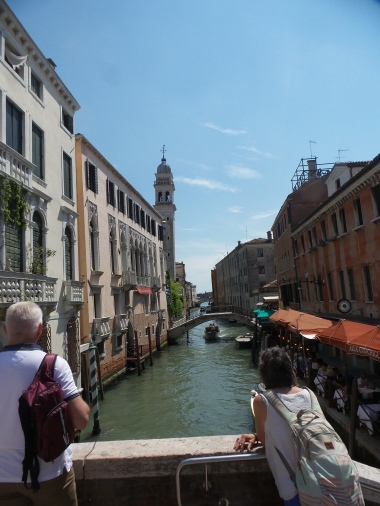 Everywhere you look here you are aware of the Lion of St Mark he has his paw firmly on a book and is winged and I wonder if there are any the same.

It seemed to me that they are extremely individual. There is a very bored one outside Canova’s Tomb in S Maria Gloriosa dei Frari.  Lions outside the entrance to the Arsenale; supercilious, confused, shy, and in this case stolen from the Lebanon or thieved from the Greek island of Delos, I was glad that we aren’t the only robbers of antiquity 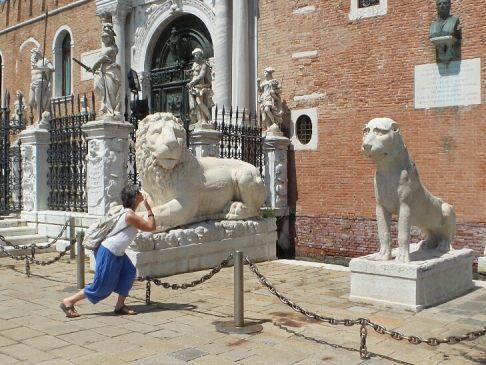 To be in Venice for my birthday was special, along with my new blackbird that has a voice, Andy found a book in a book swap set in a tree –  promising a ‘true tale of love lust and linguine’ in…. guess where?… Venice! And some beautiful little earrings bought from ‘Peter’s’, our favourite shop in Sivota Mourtos. 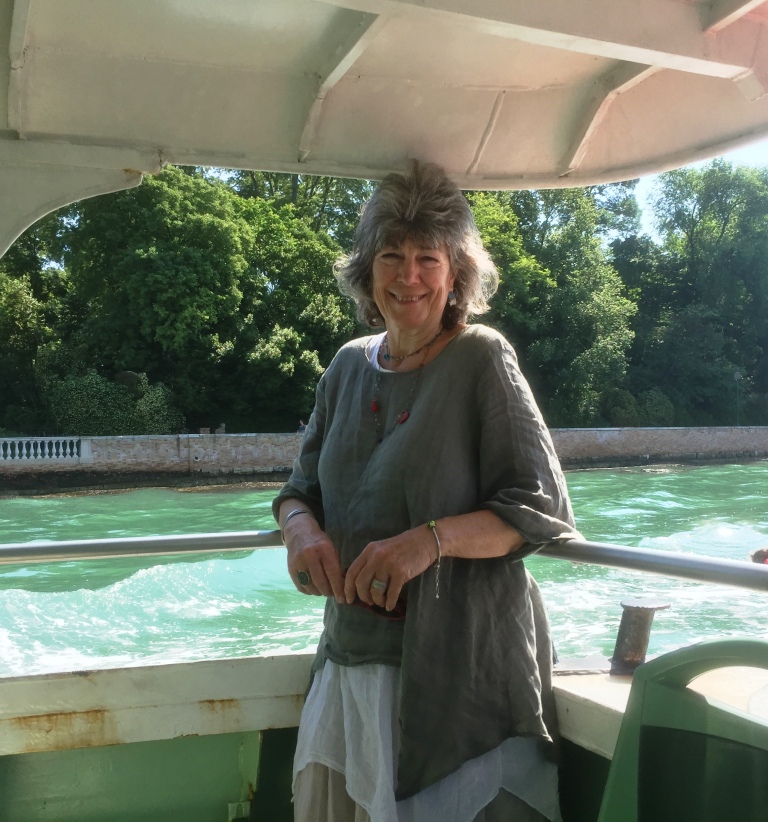 We met our friends Ann and Thal from Burntisland with their American friends. We had lunch together and later introduced them to the boat. 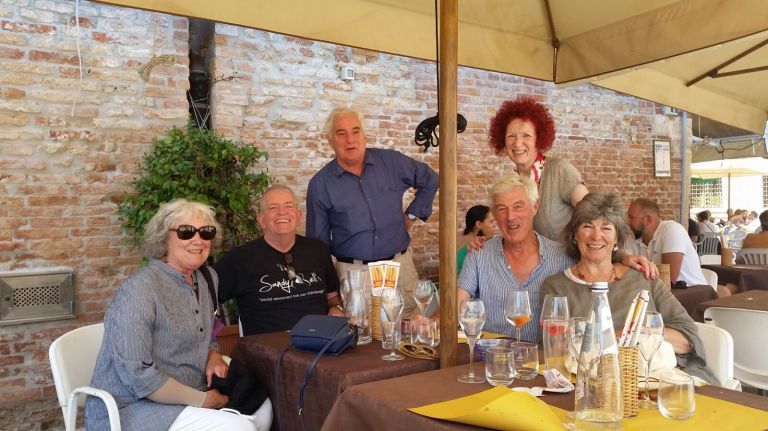 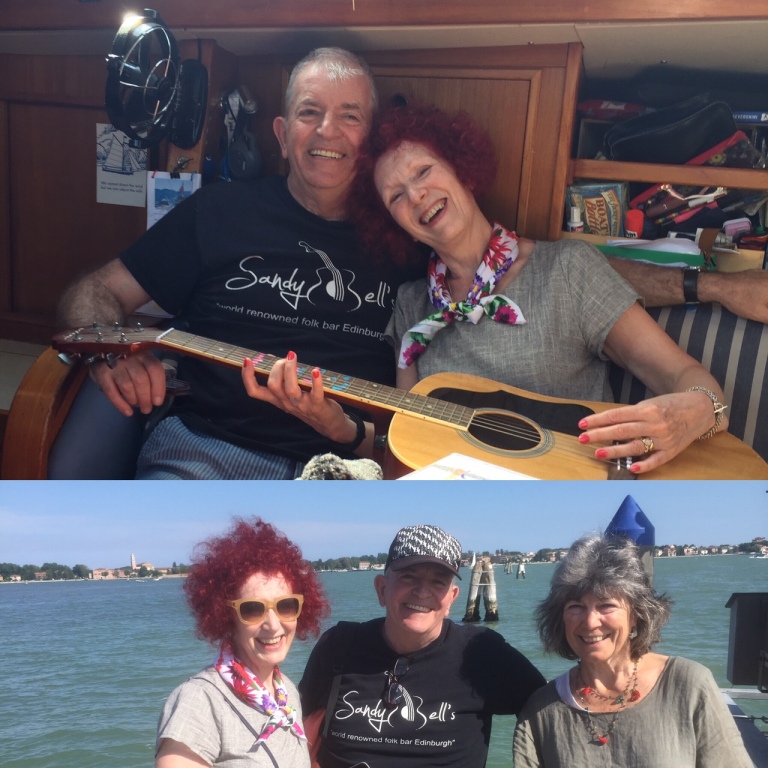 String and Ben,  Mary and Phil sail with us every year.  Adventurously setting out to find us, sometimes in obscure places, and trusting that we will get them back to an airport at the end of their stay – there have been dramas!  Now this is slightly different.  We said we were going to visit Venice in the boat and they came up with the idea of a rendez-vous – my birthday was a coincidence.  They arrived late Saturday night and we met the following day for drinks, lunch and laughter. The decibel level in Arsenale went up considerably! String took us to see a ceramic workshop. It was set in a pretty garden in the centre of which was a pond and in the middle this lovely figure.

Everyone was very patient while we chose things

String bought me two lovely little beakers, perfect for an espresso or a grappa, I returned later to find the place closed but persevering, peering shamelessly through the windows  found Nadia teaching.  She invited me in and I bought two more I need to have some at home!

Florians, you have to go to Florians the oldest Venetian cafe in the Piazza, the assiduous white coated waiters, slapping down a bill for 6 Euros per person for the music before even taking an order, inside are the sumptuously decorated, richly gilded Baroque rooms and the orchestra plays. We drink, we dance; I tumble and fall and try to make out this is a new break dance move.   The tide comes up in the square and I paddle as the evening comes down. 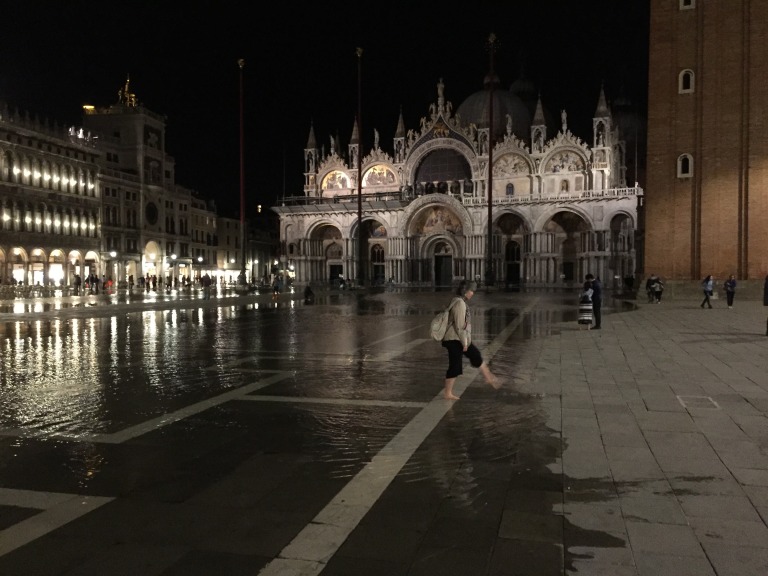 I hadn’t thought of tide, it does not usually concern us in the Mediterranean but here it is quite noticeable and one of my favourite, hidden gems was a bronze sculpture of a woman partisan. It was originally designed to float but in 1962 when it was installed the technology was not up to it and it is regularly lapped and covered by a rising tide only to be revealed again as it drops – a very moving piece. It was backed by gardens now the site of the famous Biennale and stopped by the oldest surviving structure which was a quirky mix of garden centre and coffee shop 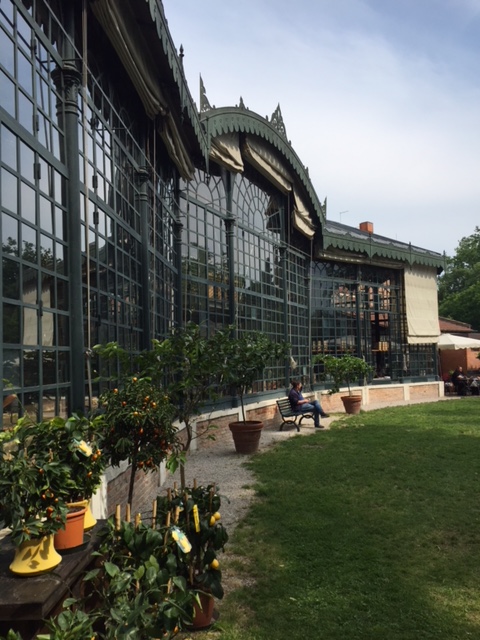 We were greeted by the Count and Contessa of Dauntsey as we arrived at their palace (B&B!) for drinks on their rooftop terrace before going out to find yet more food and drink. 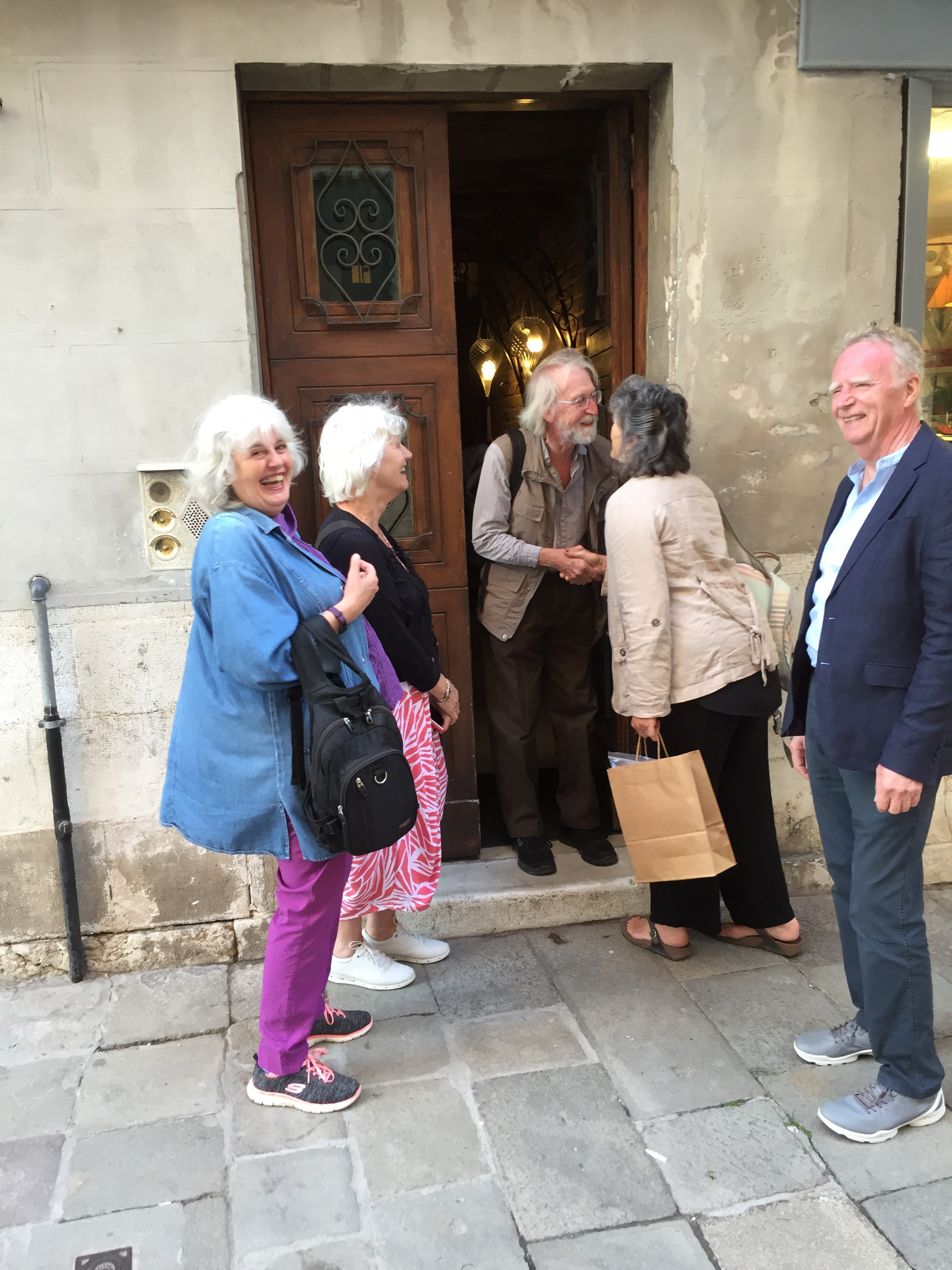 Everyone knows that Venice is a city under stress from tourism and it becomes scarily evident when, having a peaceful Campari Spritz in the Via Garibaldi, we glance up to see that a cruise liner is about to become a near neighbour! 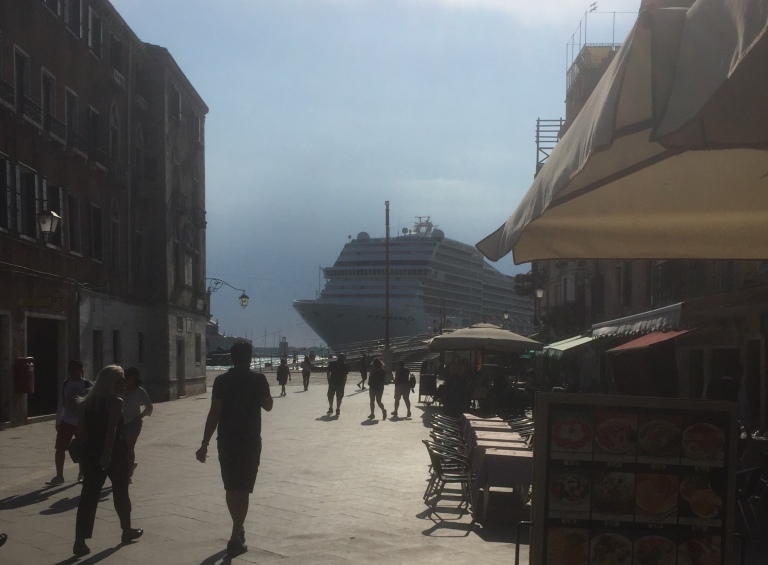 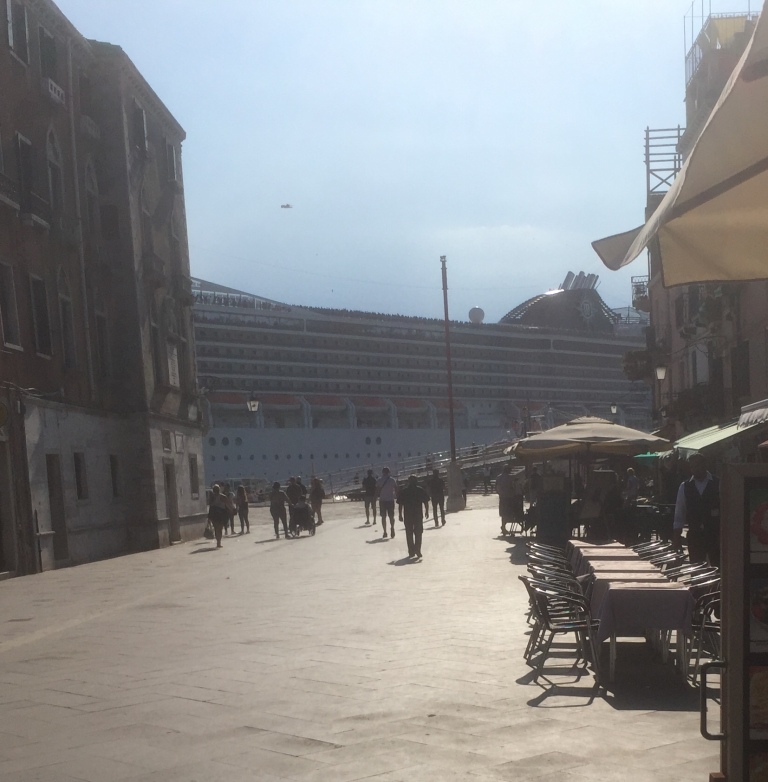 We had two fabulous days in Padua. On either side of the Pallazzo della Ragione are two large squares with fantastic markets and underneath the building in the arcades are shops selling cheeses, salamis, meat, pastas and antipasti such that you would want to go mad and buy masses, sadly I don’t have room. In the grand hall so massive it took your breath away, there were frescoes covering every inch, showing the seasons, zodiac signs, biblical scenes, significant people and a small golden sun which, when midday came shone a beam of light along a meridian and there was this huge horse and I cannot remember what that was all about only that it was dwarfed in this room.   There stirred vague memories of an OU module I did on Trecento Art in Florence Siena and Padua. I was glad to have got to Padua at last.

We visited the Giottos in the Capella degli Scrovegni – more warning scenes and symbols of what will happen if we are BAD. Miraculously the chapel had escaped the WW2 bombing and threats of destruction over previous centuries and are luminous and fresh to this day. We also visited the University the second oldest in Italy after Bologna and I think the first to have built an amphitheatre so students of medicine could witness the dissection of the human body – a difficult thing at a time when the church was fiercely against such heretical ‘practices’

We left Certosa at dawn and had an uneventful passage with disappointingly little wind. The water is very shallow, 30 metres or less and strewn with energy platforms and fog warning structures. The murky Po river water washed us down along with the occasional small tree and the company of a dolphin or two towards Rimini and a long held promise to see my friend and Nia sister, Letizia. As we neared the city the number of fishing flags increased and we slalomed through them and up the river where Letizia was there to meet us. We have had a fabulous few days with her generous hospitality, use of washing machine, wifi and car to shop and cram the boat full of treats we cannot get easily in Croatia. We danced on the back of the boat and at her class – it has to be done!

I was able to take Andy to see the ‘House of the Surgeon’ a fairly recently excavated area and then to the museum which has a mock up of the rooms and a lot more information about what we have just seen. We took a train to Ravenna where the number and quality of the mosaics are quite stunning. 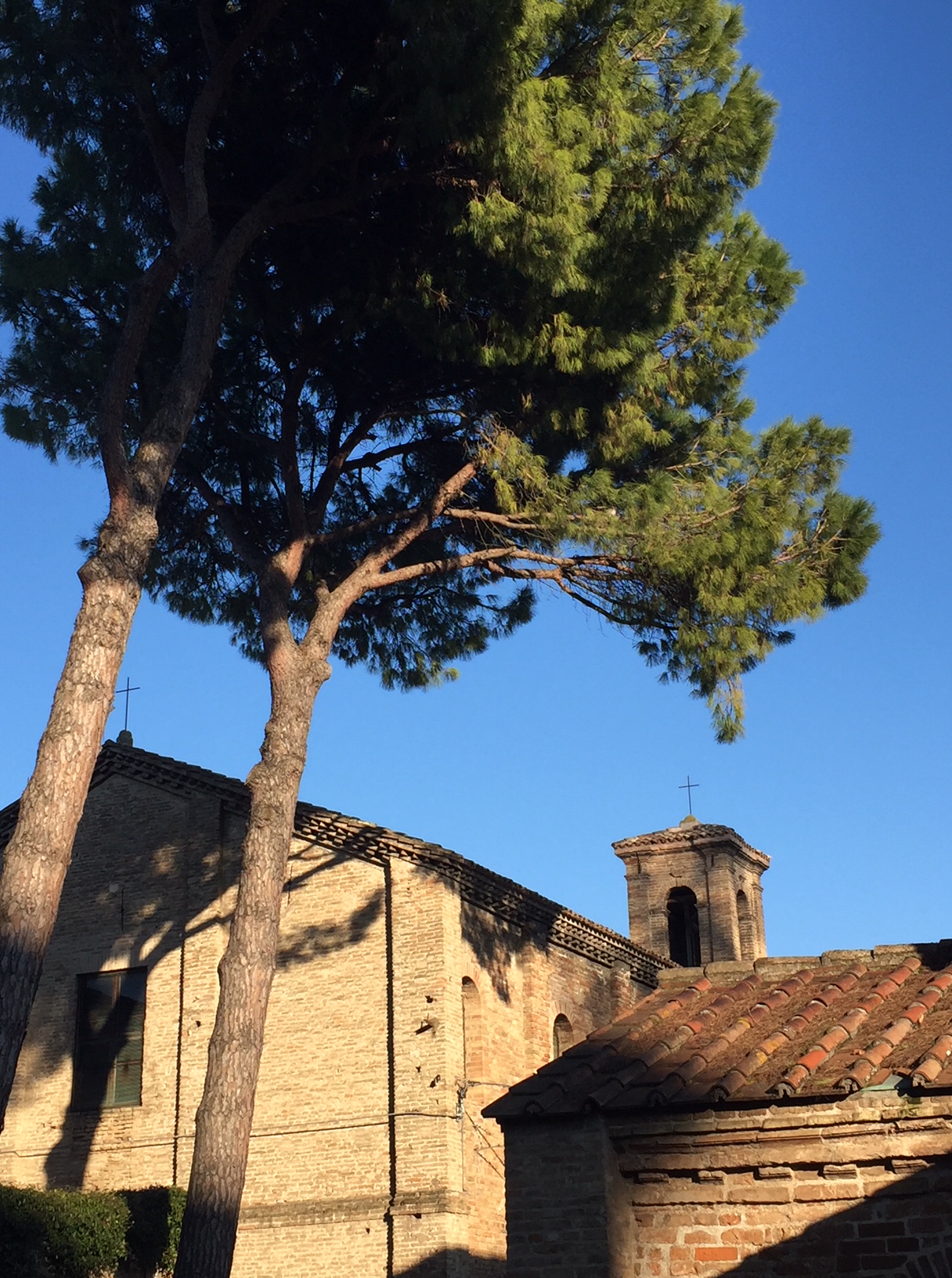 Now, thoroughly sated with cities and culture, probably dreaming in mosaic we are looking forward to a few weeks in the islands off Croatia in relative isolation, anchoring and swimming and no more long trips for a while.